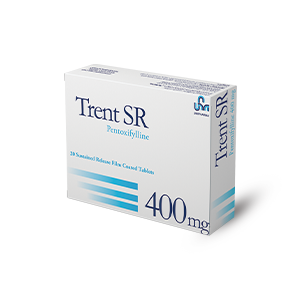 Trent SR
Composition:
Each sustained release film coated tablets contains 400mg pentoxifylline.
Pharmacokinetic properties:
The half-life of absorption of pentoxifylline is 46 hours. Pentoxifylline is extensively metabolised, mainly in the liver. Sixty percent of a single dose of pentoxifylline is eliminated via the kidney over 24 hours.
Indications:
Pentoxifylline is indicated in the treatment of peripheral vascular disease, including intermittent claudication and rest pain.
Contraindications:
Pentoxifylline contraindicated in cases where there is known hypersensitivity to the active constituent, pentoxifylline other methyl xanthines or any of the excipients. Also in patients with cerebral hemorrhage, extensive retinal hemorrhage, acute myocardial infarction and severe cardiac arrhythmias.
Pregnancy and breastfeeding:
There is no information on the use of pentoxifylline in pregnancy but no untoward effects have been found in animal studies. Pentoxifylline should not be administered during pregnancy.
Pentoxifylline passes into breast milk in minute quantities.
Dosage and administration:
The recommended initial dose is 1 tablet pentoxifylline 400 mg three times daily with or immediately after meals, and swallowed whole with plenty of water. Two tablets daily may prove sufficient in some patients, particularly for maintenance therapy.
Elderly: no special dosage requirements.
Children: pentoxifylline is not suitable for use in children.
Special cases: in patients with impairment of renal function (creatinine clearance below 30ml/min), a dose reduction by approximately 30% to 50% may be necessary guided by individual tolerance.
Overdose:
The treatment of over-dosage should be symptomatic with particular attention to supporting the cardiovascular system.
Storage conditions:
Store at room temperature (15 to 30 °c). Protect from light .protect from moisture and excessive heat.
Packaging:
Carton pack of 20 sustained release film coated tablets.