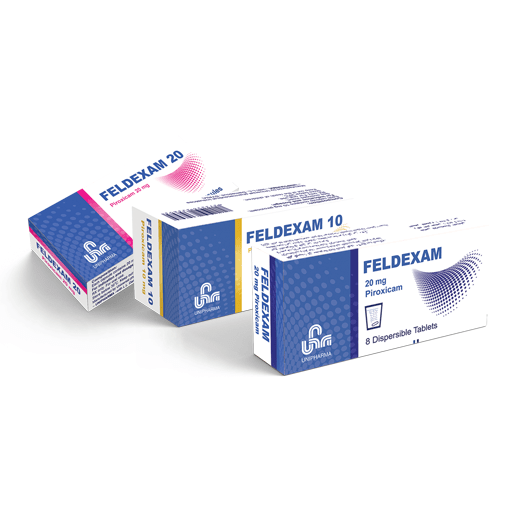 Feldexam Capsule (10 mg, 20 mg) Feldexam Dispersible tablets 20 mg
Composition:
•    Capsules: Each capsule contains 10 or 20 mg piroxicam.
•    Dispersible tablets: Each Dispersible Tablet contains 20 mg Piroxicam.
Excipients:
•    Capsules :Lactose, maize starch, magnesium stearate, sodium lauryl sulfate.
•    Dispersible tablets: Lactose, Microcrystalline cellulose, Hydroxypropyl cellulose, Sodium stearyl fumarate Cardiovascular Risk
•    NSAIDs may cause an increased risk of serious cardiovascular thrombotic events, myocardial infarction, and stroke, which can be fatal. This risk may increase with duration of use. Patients with cardiovascular disease or risk factors for cardiovascular disease may be at greater risk
•    piroxicam is contraindicated for the treatment of peri-operative pain in the setting of coronary artery bypass graft (CABG) surgery
Gastrointestinal Risk
NSAIDs cause an increased risk of serious gastrointestinal adverse events including bleeding, ulceration, and perforation of the stomach or intestines, which can be fatal. These events can occur at any time during use and without warning symptoms. Elderly patients are at greater risk for serious gastrointestinal events

DOSAGE AND ADMINISTRATION:
The prescription of piroxicam should be initiated by physicians with experience in the diagnostic evaluation and treatment of patients with inflammatory or degenerative rheumatic diseases.
The maximum recommended daily dose is 20mg.
Adults: Initially 20mg given as a single daily dose. The majority of patients may be maintained on 20mg a day, a relatively small group of patients may be maintained on 10mg daily.
Children: Not recommended for children under 12 years of age.
Elderly: There are no specific modifications required in the elderly, except where hepatic, renal or cardiac function is impaired, in which case dosage should be individually assessed. The elderly are at increased risk of the serious consequences of adverse reactions. If an NSAID is considered necessary, the lowest effective dose should be used and for the shortest possible duration. The patient should be monitored regularly for GI bleeding during NSAID therapy.
Piroxicam dispersible tablets:
The recommended starting dose is 10 mg daily. Thereafter the usual dose is 10 to 20 mg taken as a single dose each day, with or immediately after food.
Piroxicam dispersible tablets should be dispersed in a maximum of 50 ml of water and then swallowed.
OVERDOSAGE:
Symptoms following acute NSAID overdoses are usually limited to lethargy, drowsiness, nausea, vomiting, and epigastric pain, which are generally reversible with supportive care. Gastrointestinal bleeding can occur.
Patients should be managed by symptomatic and supportive care following an NSAID overdose. There are no specific antidotes. Emesis and/or activated charcoal (60–100 g in adults, 1–2 g/kg in children) and/or osmotic cathartic may be indicated. Forced diuresis, alkalinization of urine, hemodialysis, or hemoperfusion may not be useful due to high protein binding.
Storage conditions:
Store below 30°C.
How supplied:
•    Capsules: - Pack of 10 capsules for 20mg.
- Pack of 20 capsules for 10mg.
•    Dispersible Tablets: Pack of 8 Dispersible Tablets