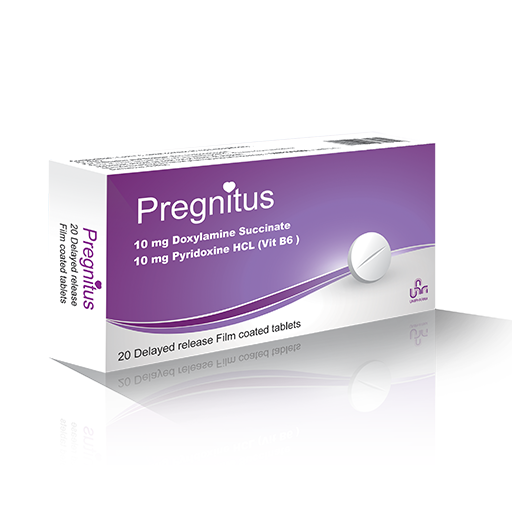 Indications:
Pregnitus is indicated for the treatment of nausea and vomiting of pregnancy in women who do not respond to conservative management.
Limitations of Use: THIS DRUG has not been studied in women with hyperemesis gravidarum.

Warnings & Precautions:
Activities Requiring Mental Alertness: THIS DRUG may cause somnolence. Women should avoid engaging in activities requiring complete mental alertness, such as driving or operating heavy machinery, while using THIS DRUG.
The use of this drug is not recommended if a woman is concurrently using central nervous system depressants including alcohol. The combination may result in severe drowsiness leading to falls or accidents.
Concomitant Medical Conditions: THIS DRUG has anticholinergic properties and, therefore, should be used with caution in women with: asthma, increased intraocular pressure, narrow angle glaucoma, stenosing peptic ulcer, pyloroduodenal obstruction and urinary bladder-neck obstruction.

Pregnancy:
Category A, Pregnitus is intended for use in pregnant women.

Lactation:
Women should not breastfeed while using THIS DRUG.
Excitement, irritability and sedation have been reported in nursing infants presumably exposed to doxylamine succinate through breast milk. Infants with apnea or other respiratory syndromes may be particularly vulnerable to the sedative effects of THIS DRUG resulting in worsening of their apnea or respiratory conditions.
Pyridoxine hydrochloride is excreted into breast milk. There have been no reports of adverse events in infants presumably exposed to pyridoxine hydrochloride through breast milk.

Drug Interactions:
-    Use of THIS DRUG is contraindicated in women who are taking monoamine oxidase inhibitors, which prolong and intensify the anticholinergic (drying) effects of antihistamines.
-    Concurrent use of alcohol and other CNS depressants (such as hypnotic, sedatives) with THIS DRUG is not recommended.
Side effect:
Somnolence, Falls or other accidents resulting from the effect of the combined use of THIS DRUG with CNS depressants including alcohol.
Postmarketing Experience:
dyspnea, palpitation, tachycardia, vertigo, blurred vision, visual disturbances, abdominal distension, abdominal pain, constipation, diarrhea, chest discomfort, fatigue, irritability, malaise, hypersensitivity, dizziness, headache, migraines, paresthesia, psychomotor hyperactivity, anxiety, disorientation, insomnia, nightmares, dysuria, urinary retention, hyperhidrosis, pruritus, rash, maculo-papular rash.
Doses & Administration:
•    Initially, take two delayed-release tablets orally at bedtime of Pregnitus.  If this dose adequately controls symptoms the next day, continue taking two tablets daily at bedtime. However, if symptoms persist into the afternoon of Day 2, take the usual dose of two tablets at bedtime that night then take three tablets starting on Day 3 (one tablet in the morning and two tablets at bedtime). If these three tablets adequately control symptoms on Day 4, continue taking three tablets daily. Otherwise take four tablets starting on Day 4 (one tablet in the morning, one tablet mid-afternoon and two tablets at bedtime).
•    The maximum recommended dose is four tablets daily.
•    the delay in the onset of action of this drug may be further delayed, and a reduction in absorption may occur when tablets are taken with food. Therefore, it should be taken on an empty stomach with a glass of water.
•    Swallow tablets whole. Do not crush, or chew the tablets.
•    Take as a daily prescription and not on an as needed basis. Reassess the woman for continued need for THIS DRUG as her pregnancy progresses.

Overdoses:
Pregnitus is a delayed-release formulation, therefore, signs and symptoms of intoxication may not be apparent immediately.
Signs and symptoms of overdose may include restlessness, dryness of mouth, dilated pupils, sleepiness, vertigo, mental confusion and tachycardia. At toxic doses, doxylamine exhibits anticholinergic effects, including seizures, rhabdomyolysis, acute renal failure and death.
If treatment is needed, it consists of gastric lavage or activated charcoal, whole bowel irrigation and symptomatic treatment.