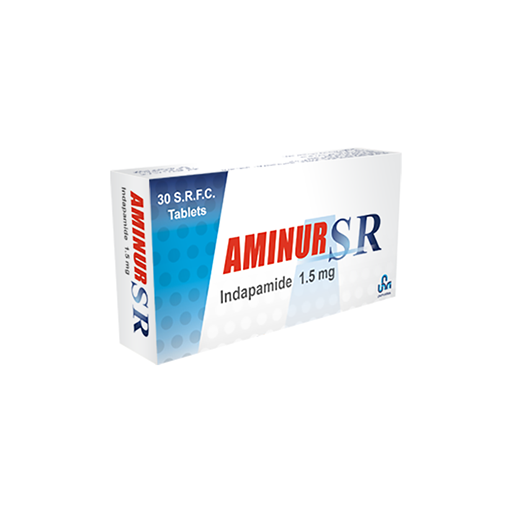 Indapamide is a sulfonamide derivative, pharmacologically related to thiazide diuretics. It increases the urinary excretion of sodium and chlorides and, to a lesser extent, the excretion  of potassium and magnesium, thereby increasing urine output and having an antihypertensive action.

Absorption: The fraction of indapamide released is rapidly and totally absorbed via the
gastrointestinal digestive tract. Eating slightly increases the rapidity of absorption but has no influence on the amount of the drug absorbed. Peak serum level following a single dose occurs about 12 hours after ingestion.

Distribution: Binding of indapamide to plasma proteins is 79%. The plasma elimination halflife is 14 to 24 hours (mean 18 hours). Repeated administration does not lead to accumulation.

Metabolism: Elimination is essentially urinary (70% of the dose) and faecal (22%) in the form of inactive metabolites.

Indications:
It is indicated in essential hypertension in adults and for treatment of salt and fluid retention associated with congestive heart failure.

One tablet per 24 hours, preferably in the morning, to be swallowed whole with water and not chewed.

At higher doses the antihypertensive action of indapamide is not enhanced but the saluretic effect is increased.

Renal impairment: In severe renal failure (creatinine clearance below 30 ml/min), treatment is contraindicated. Thiazide and related diuretics are fully effective only when renal function is normal or only minimally impaired.

Storage conditions: Store in a dry place below 25°C.