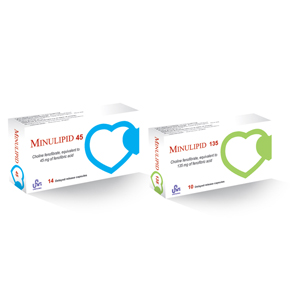 The lipid-modifying effects of fenofibric acidseen in clinical practice have been explained by the activation of peroxisomeproliferator activated receptor α (PPARα). Through this mechanism, fenofibricacid increases lipolysis and elimination of triglyceride-rich particles from plasma by activating lipoprotein lipase and reducing production of Apo CIII (aninhibitor of lipoprotein lipase activity).

Activation of PPARα also induces an increase in the synthesis of HDL-C and Apo AI and AII.

Plasma concentrations of fenofibric acid after administration of one 135 mg Minulipid delayed release capsule are equivalent to those after one 200 mg capsule of micronized fenofibrate administered underfed conditions.

Peak plasma levels of fenofibric acid occur within 4 to 5 hours after a single dose administration of Minulipid capsule under fasting conditions.

Fenofibric acid exposure in plasma, as measured by Cmax and AUC, is not significantly different when a single 135 mg dose of Minulipid is administered under fasting or non fasting conditions.

Metabolism Fenofibric acid is primarily conjugated with glucuronic acid and then excreted in urine.

Fenofibric acid is eliminated with a half-life of approximately 20 hours, allowing once daily administration of Minulipid.

v  Co-administration Therapy with Statins for theTreatment of Mixed Dyslipidemia

Trlipi is indicated as an adjunct to diet in combination with a stain to reduce TG and increase HDL-Cin patients with mixed dyslipidemia and CHD or a CHD risk equivalent who are on optimal stain therapy to achieve their LDL-C goal.

Multiplerisk factors that confer a 10-year risk for CHD > 20%.

Trlipiis indicated as adjunctive therapy to diet to reduce TG in patients with severe hyperglycemia. Improving glycemic control in diabetic patients showing fasting chylomicronemia will usually obviate the need for pharmacological intervention. Markedly elevated levels of serum triglycerides (e.g. > 2,000mg/dL) may increase the risk of developing pancreatitis. The effect of Trlipi the rapy on reducing this risk has not been adequately studied.

Trlipiis indicated as adjunctive therapy to diet to reduce elevated LDL-C, Total-C,TG, and Apo B, and to increase HDL-C in patients with primary hyperlipidemia ormixed dyslipidemia.

Fenofibrateat a dose equivalent to 135 mg of Trlipi was not shown to reduce coronary heart disease morbidity in a large, randomized controlled trial of patients with type 2 diabetes mellitus.

Laboratorystudies should be performed to establish that lipid levels are abnormal before instituting Trlipi the rapy.

Every reasonable attempt should be made to control serum lipids with non-drug methods including appropriate diet, exercise, weight loss in obese patients, and control of any medical problems such as diabetes mellitus and hypothyroidism that may be contributing to the lipid abnormalities. Medications known to exacerbate hyperglycemia(beta-blockers, thiazides, estrogens) should be discontinued or changed if possible, and excessive alcohol intake should be addressed before triglyceride-lowering drug therapy is considered. If the decision is made to use lipid-altering drugs, the patient should be instructed that this does not reduce the importance of adhering to diet.

Drug therapy is not indicated for patients who have elevations of chylomicrons and plasma triglycerides, but who have normal levels of VLDL.

Patients should be placed on an appropriate lipid-lowering diet before receiving minulipid as mono therapy or co-administered with a statin and should continue this diet during treatment. Trlipi delayed release capsules can be taken without regard to meals. Serumlipids should be monitored periodically. The maximum dose is 135 mg once daily.

Co-administration Therapy with Statins for the Treatment of Mixed Dyslipidemia

Trlipi 135 mg may be co-administered with anHMG-CoA reductase inhibitor (statin) in patients with mixed dyslipidemia. For convenience, the daily dose of Trlipi may be taken at the same time as astatin, according to the dosing recommendations for each medication.Co-administration with the maximum dose of a statin has not been evaluated in clinical studies and should be avoided unless the benefits are expected to outweigh the risks.

The initial dose of Trlipi is 45 to 135 mg once daily. Dosage should be individualized according to patient response, and should be adjusted if necessary following repeat lipid determinations at 4 to 8 week intervals. The maximum dose is 135 mg once daily.

The dose of Minulipid is 135 mg once daily.

patients with severe renal impairment, including those receiving dialysis.

WhenTrlipi is co-administered with a statin.

Fibrateand statin mono therapy increase the risk of myositis or myopathy, and have been associated with rhabdomyolysis. Data from observational studies suggest that the risk for rhabdomyolysis is increased when fibrates are co-administered with a statin (with a significantly higher rate observed for gemfibrozil).

Trlipiat a dose of 135 mg once daily administered as mono therapy or co-administered with low to moderate doses of statins has been associated with increases in serum transaminases [AST (SGOT) or ALT (SGPT)].

Regular monitoring of liver function, including serum ALT (SGPT) should be performed for the duration of therapy with Trlipi,and therapy discontinued if enzyme levels persist above 3 times the upper limit of normal.

Trlipi, like fenofibrate, clofibrate, and gemfibrozil, may increase cholesterol excretion into the bile, potentially leading to cholelithiasis.

Trlipi therapy should be discontinued if gallstones are found.

Caution should be exercised when Trlipi isgiven in conjunction with oral coumarin anticoagulants.

Trlipi may potentiate the anticoagulant effects of these agents resulting in prolongation of the prothrombin time/INR.

Pancreatitis has been reported in patient staking drugs of the fibrate class, including Trlipi

Mild to moderate hemoglobin, hematocrit, and white blood cell decreases have been observed in patients following initiation of Trlipi and fenofibrate therapy.

Reported by 2% or More of Patients Treated with Fenofibrate and Greater :

Caution should be exercised when oral coumarin anticoagulants are given in conjunction with Trlipi.

Since bile acid resins may bind other drugs given concurrently, patients should take Trlipi at least 1 hour before or 4-6 hours after a bile acid resin to avoid impeding its absorption.

Because cyclosporine can produce nephrotoxicity with decreases in creatinine clearance and rises in serum creatinine, and because renal excretion is the primary elimination route of drugs of the fibrate class including Trlipi, there is a risk that an interaction will lead to decline of renal function.

When Minulipid is administered with a statin in a woman of childbearing potential, refer to pregnancy category and product labeling for the statin . All statins are contraindicated in pregnant women.

The safety and effectiveness of Minulipid monotherapy or co-administration with a statin in pediatric patients have not been established.

There is no specific treatment for overdose with Minulipid. General supportive care of the patient is indicated, including monitoring of vital signs and observation of clinical status, should an overdose occur. If indicated, elimination of absorbed drug should be achieved by or gastric lavage; usual precautions should be observed to maintain the airway. Because Minulipid is highly bound to plasma proteins, hemodialysis should not be considered.

Keep out of the reach of children.