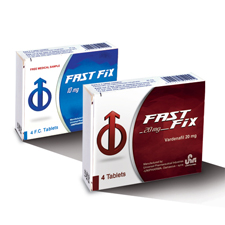 Penile erection is a haemodynamic processbased on the relaxation of smooth muscle in the corpus cavernosum and itsassociated arterioles. During sexual stimulation, from nerve ends in the corpuscavernosum nitric oxide (NO) is released, which activates the enzyme guanylatecyclase resulting in an increased level of cyclic guanosine monophosphate(cGMP) in the corpus cavernosum. This in turn triggers smooth musclerelaxation, allowing increased inflow of blood into the penis resulting inerection. The actual cGMP level is regulated by the rate of synthesis via theguanylate cyclase on the one hand, and by the rate of degradation via cGMPhydrolyzing phosphodiesterases (PDEs) on the other hand.

The most prominent PDE in the human corpuscavernosum is the cGMP specific phosphodiesterase type 5 (PDE5).

Daily use of vardenafil atdoses of 10 mg to 40 mg for 31 days was not associated with changes in visualacuity, intraocular pressure, or findings on fundoscopic or slit lampexamination.

Effects on Exercise Performance in Patients with Coronary Artery Disease:

Vardenafil is rapidly absorbed after oral administration. Cmaxis reached as early as 15 minutes, in 90% of the time Cmax is reached within 30to 120 minutes (median 60 minutes) of oral dosing in the fasted state.

There is extensive first-passmetabolism of vardenafil, resulting in considerable inter-subject and intra-subjectvariability in the observed pharmacokinetic parameters. The mean absolutebioavailability is approximately 15% after a 10 mg dose. After oral dosing ofvardenafil, AUC and Cmax increase almost dose proportionally over therecommended dose range (5 mg – 20 mg).

When vardenafil was taken with a high fat meal, the rate ofabsorption was reduced by approximately 20%, median tmax was delayed byapproximately 1 hour. After a ‘normal meal’, pharmacokinetic parameters werenot significantly affected.

The mean steady state volume of distribution (Vss) forvardenafil is about 2.5 L/kg, indicating distribution into the tissues.

Based upon measurements of vardenafil in semen of healthysubjects 90 minutes after dosing, not more than 0.00012% of the administereddose may appear in the semen of patients.

Vardenafil is metabolised predominantly by hepatic enzymes viaCYP3A4, with some contribution from CYP3A5 and CYP2C9 isoforms.

The elimination half-life of metabolite M1, the major circulatingmetabolite in humans, is between 3 to 5 hours, similar to parent drug.

M1 results from desethylation at the piperazine moiety ofvardenafil, and is subject to further metabolism.

M1 in the form of its glucuronic acid conjugate is found insystemic circulation, M1 shows a phosphodiesterase selectivity profile similarto that of vardenafil.

No overall differences in safety or effectiveness were observedbetween elderly and younger subjects in placebo controlled clinical trials.

No dose adjustment is needed in patients with impaired renalfunction. The pharmacokinetics of vardenafil has not been studied in patientsrequiring dialysis and vardenafil should not be used in this situation.

Vardenafil iscontraindicated in patients with known hypersensitivity to any of the drug’scomponents (active or inactive ingredients).

Vardenafilis contraindicated in men for whom sexual intercourse is inadvisable due tocardiovascular risk factors.

Vardenafilis contraindicated in patients who have loss of vision in one eye because ofnon-arteritic anterior ischaemic optic neuropathy (NAION), regardless ofwhether or not this episode was in connection with previous PDE5 inhibitorexposure.

Thesafety of vardenafil has not been studied in patients with the followingconditions and its use in such patients is therefore contraindicated untilfurther information is available: unstable angina; resting or orthostatichypotension, uncontrolled hypertension; myocardial infarction, stroke, cardiacischaemia (except stable angina), or life-threatening arrhythmia within theprevious 6 months; uncontrolled arrhythmia; severe hepatic impairment;end-stage renal disease requiring dialysis; known hereditary degenerativeretinal disorders such as retinitis pigmentosa.

Concomitantuse of Vardenafil with HIV Protease inhibitors such as indinavir or ritonaviris contraindicated, as these drugs are very potent inhibitors of CYP3A4.

Inmen for whom sexual activity is not recommendable because of their underlyingcardiovascular status, agents for the treatment of erectile dysfunction shouldgenerally not be used.

Agents for the treatment of erectiledysfunction should generally be used with caution in patients with anatomicaldeformation of the penis, such as angulation, cavernosal fibrosis or Peyronie’sdisease) or in patients who have conditions which may predispose them topriapism (such as sickle cell anaemia, multiple myeloma or leukaemia.

Vardenafil has not been administered topatients with bleeding disorders or significant active peptic ulceration.Therefore Vardenafil should be given to these patients only after carefulbenefit-risk assessment.

vardenafil alone did not inhibitplatelet aggregation.

The concomitant use of Vardenafil withalpha-blockers may lead to symptomatic hypotension in some patients.

In those patients who are stable onalpha-blocker therapy, treatment should be initiated at the lowest recommendedstarting dose using the Vardenafil of 5 mg film-coated tablets.

Use with Potent CYP 3A4Inhibitors:

Concomitant use of the moderate orpotent CYP 3A4 inhibitors ketoconazole, itraconazole, erythromycin,clarithromycin, indinavir, or ritonavir can be expected to produce markedlyincreased vardenafil plasma levels.

A maximum dose of one Vardenafil 5 mgfilm-coated tablet should not be exceeded if used in combination witherythromycin or clarithromycin. Concomitant use with indinavir or ritonavir is contraindicated.

Ability to Drive and Use Machines:

Patients should be aware of how theyreact to vardenafil before driving or operating machinery.

Vardenafil is not carcinogenic whenadministered daily for 24 months at 225 or 450 times the maximum recommendedhuman dose of 20 mg in rats and mice.

No indication for genotoxic/mutagenicactivity of vardenafil was found in vitro tests.

No effects on fertility, reproductiveperformance or reproductive organ morphology in males or females given oraldoses of vardenafil up to 100 mg/kg/day.

Use inPregnancy (Category B3) and lactation:

Vardenafil in not indicated for use bywomen.

There is no information on the potentialhypotensive effects of vardenafil when given in combination with nitrates inpatients, and concomitant use is therefore contraindicated.

There was no evidence that vardenafilpharmacokinetics were altered by co-administration of digoxin.

Single doses of an antacid, magnesiumhydroxide/aluminium hydroxide, did not affect the AUC or the Cmax ofvardenafil.

The bioavailability of Vardenafil 20 mgfilm-coated tablets was not affected by co-administration of 150 mg b.i.d ofthe H2-antagonists ranitidine.

Vardenafil did not influence bleedingtime when taken alone or in combination with low dose aspirin (2 x 81 mgtablets).

Vardenafil 20 mg did not potentiate thehypotensive effects of ethanol 0.5 g/kg bodyweight. The pharmacokinetics ofvardenafil was not altered.

The data revealed no significant effect of aspirin, ACE-inhibitors,beta-blockers, weak CYP 3A4-inhibitors, diuretics and medications for thetreatment of diabetes, sulfonylureas and metformin on the pharmacokinetics ofvardenafil.

No pharmacological, e.g. prothrombintime and clotting factor II, VII and X, interaction was shown when 25 mg ofwarfarin was co-administered with Vardenafil 20 mg film-coated tablets.Vardenafil pharmacokinetics were not affected by co-administration of warfarin.

No relevant pharmacodynamic orpharmacokinetic interaction was shown when Vardenafil 20 mg film-coated tabletswere co-administered with 30 or 60 mg of nifedipine.

The recommended starting dose of FastFixis 10 mg, taken orally 25 to 60 minutes before sexual activity. Sexual activitycan be initiated as soon as 15 minutes and as long as 4-5 hours after takingFastFix.

Themaximum FastFix recommended dose frequency is once per day.

FastFix can be taken with or withoutfood.

Sexual stimulation is required for anatural response to treatment.

Based on efficacy and tolerability, the FastFixdose may be increased to one FastFix 20 mg film-coated tablet.

Children (from birth to16 years):

FastFix is not indicated for use inchildren.

No dose adjustment is needed in patientswith mild, therefore vardenafil should not be used in patients requiringdialysis.

Concomitant use of CYP3A4 inhibitors:

A maximum dose of one FastFix 5 mg film-coatedtablets should not be exceeded when used in combination with erythromycin orclarithromycin.

Concomitant use with indinavir andritonavir is contraindicated.

When 40 mg of vardenafil wasadministered twice daily, cases of severe back pain were observed. However, nomuscle or neurological toxicity was identified.

In cases of overdose, standardsupportive measures should be taken as required. Renal dialysis is not expectedto accelerate clearance as vardenafil is highly bound to plasma proteins andnot significantly eliminated in the urine.

FastFix should be stored at a dry placeat a temperature 15 -30°C.

Keep out of the reach and sight of children.