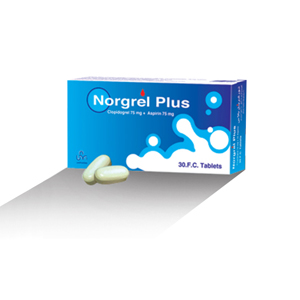 Information about Norgrel Plus
Composition:

Clopidogrel: is a specificand potent inhibitor of platelet aggregation. Platelets have an establishedrole in the pathophysiology of atherosclerotic disease and thrombotic events.Long term use of anti-platelet drugs has shown consistent benefit in the prevention of ischemic stroke, myocardial infarction and vascular death in patients at increased risk of such outcomes, including those with established atherosclerosis or a history of atherothrombosis.

occurred approximately 45 minutes after dosing.Absorption is at least 50%, based on urinary excretion of clopidogrel metabolites.

One mediated by esterases and leading to hydrolysis into its carboxylic acid derivative, which is inactive and is the main circulating metabolite.

One mediated by multiple cytochromes P450 inthe gastrointestinal tract and liver leading to the active metabolite(s) of clopidogrel, a thiol derivative, which is generated through formation of 2 oxoclopidogrel.

Clopidogrel and the main circulating metabolite bind reversibly in vitro to human plasma proteins (98% and 94% respectively). The binding is non saturable in vitro over a wide concentration range.

The aspirin in Norgrel Plus is hydrolysed to salicylic acid, with peak plasma levels of salicylic acid occurring within 1 hour of dosing.Administration of aspirin with meals did not significantly modify its bioavailability.

Theaspirin in Norgrel Plus is rapidly hydrolysed by HCE2 (human carboxylesterase 2) in the intestine and theliver to salicylic acid, with a half-life of 0.3 to 0.4 hours for aspirin doses from 75 to 100 mg. This  salicylic acidhas a plasma half-life of approximately 2 hours.

Salicylate metabolism is saturable and total body clearance decreases at higher serum concentrations, due to the limite dability of the liver to form both salicyluric acid and phenolic glucuronide.

Renal excretion of unchanged drug depends upon urinary pH. As urinary pH rises above 6.5, the renal clearance of free salicylate increases from <5% to >80%.

Norgrel Plus is a fixed-dose combination, intended as continuation of therapy in patients with acute coronary syndrome already initiated with separate clopidogrel and aspirin products:

Unstable angina ornon-ST-elevation myocardial infarction in order to prevent early and long-term atherothrombotic events. It is indicated for the treatment of acute coronary syndrome whether or not patients undergo cardiac revascularization (surgical orPCI, with or without stent).

ST-segment elevation acute myocardial infarction in order to prevent atherothrombotic events. Norgrel Plus reduces the rate of death from any cause and the rate of a combine dendpoint of death, re-infarction or stroke in medically treated patient seligible for thrombolytic therapy.

Norgrel Plus is contraindicated in case of:

Hypersensitivity to clopidogrel, salicylates or any of the excipients.

Known allergy to Non-Steroidal Anti-Inflammatory Drugs (NSAIDs) and in patients with the syndrome of asthma with rhinitis and/or nasal polyps.

This product should be discontinued 7 days prior to elective surgery when anti-platelet effect is not desired.

In patients at high risk ofophthalmic bleeding due to intraocular lesions, clopidogrel should be used with extra caution.

It should be used with caution inpatients who have lesions with a propensity to bleed. NSAIDs are not recommended in patients taking this product.

It should be used with caution in patients with a history of peptic ulcer or gastroduodenal haemorrhage or minor upper gastrointestinal symptoms.

Physicians should be alert forsigns of ulceration and bleeding.

Patients should be told about the signs and symptoms of gastrointestinal side effects.

To prevent gastric irritation dueto aspirin, it should be taken with or after food.

Norgrel Plus is to be used under medical supervision only.

Norgrel Plus should not beused in women during pregnancy unless the potential benefits out weigh the risks.

Breast-feeding is contraindicated during treatment with it.

This product should not be administered simultaneously with other salicylate containing preparations,uricosuric agents or NSAIDs.

The concomitant administration with oral anticoagulants, including warfarin, is not recommended since it may increase the intensity of bleeding.

A pharmacodinamic interaction between it and glycoprotein IIb/IIIa inhibitors is possible.

The concomitant use of NSAID sincluding Cox-2 inhibitors is not recommended with it.

Aspirin may inhibit the effect of uricosuric agents (e.g probencid) through competitive elimination of uric acid.

It may interfere with the metabolism of bupropion, lansoprazole, omeprazole, pantoprazole, diazepam,phenytoin, tamoxifen, tolbutamide, warfarin, fluvastatin, and many NSAIDs.

The hypoglycaemic effect of chlorpropamide may be enhanced by co-administration with aspirin.

Co-administration with ACEI, orARB, and thiazide diuretic may increase the risk of renal impairment.

Effectson ability to drive and use machines:

This product has no or negligible influence on the ability to drive and use machines.

In addition, aspirin is associated with more other side effects: it produces a prolongation of the bleeding time and may produce epigastric distress, nausea and vomiting, gastric or duodenal ulcers and erosive gastritis which may lead to serious gastrointestinal bleeding.

Iron deficiency anaemia as a result of occult gastrointestinal bleeding when aspirin is used for long periods of time.

Aspirin may cause haemolysis in patients with glucose-6-phosphate dehydrogenase deficiency.

Aspirin may cause tinnitus, dizziness,vertigo or hearing loss.

Aspirin may cause acute renal impairment and in low doses retention of uric acid, whereas high dosage may increase excretion.

Norgrel Plus is given as asingle tablet (75mg/75mg ) once a day taken with adequate water.

It is used following an initial loadingdose of 300 mg clopidogrel in combination with aspirin in patients with acute coronary syndrome:

Treatment should be initiated with a single 300 mg loading dose of clopidogrel plus aspirin (75 mg to 325mg).

Long-term daily treatment should be continued with one Clopidogrel Plus Aspirin tablet (75mg/75mg )once a day taken with adequate water.

Daily treatment should continue with one Norgrel Plus tablet (75mg/75mg ) once a day with adequate water.

In patients who have had percutaneous coronary intervention with stent insertion, clopidogrel and aspirin should be continued for as long as is currently recommended inevidence-based guidelines for the type of stent and circumstances of implantation or for as long as otherwise indicated, taking into account the overall atherothrombotic risk profile of the patient.

Should doses of aspirin greater than 100 mg be required for daily maintenance therapy,clopidogrel and aspirin products should be administered separately.

The use ofhigher dose of clopidogrel in patients who are poor CYP2C19 metabolizers,should be considered.

It should not beused in patients with severe renal impairment or severe hepatic impairment.

No dosage adjustment is necessary for elderly patients.

Safety and efficacy in subjects below the age of 18 have not been established.

In case of severe aspirin overdose,admission to hospital is necessary, control of acid-base balance, possibility of haemodialysis or peritoneal dialysis if necessary.

A part from general measures, treatment of aspirin over dosage consists chiefly of measures to accelerate the excretion (forced alkaline diuresis) and to restore the acid-base and electrolyte balance. Infusions of sodium bicarbonate and potassium chloride solutions maybe given.

It should be stored below 25ºC.