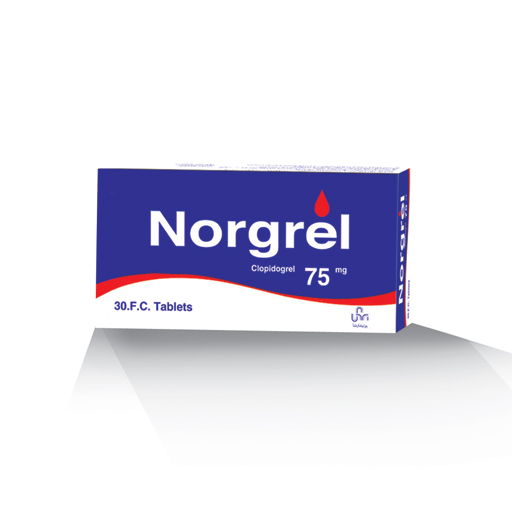 Norgrel (clopidogrel bisulfate) is an inhibitor ofADP-induced platelet aggregation acting by direct inhibition of adenosine diphosphate (ADP) binding to its receptor and of the subsequent ADP-mediated activation of the glycoprotein GPllb/llla complex.

Norgrel is indicated for the reduction of atherothrombotic events as follows:

The use of Norgrel is contraindicated in the following conditions:

Hypersensitivity to the drug substance or any component of the product.

Active pathological bleeding such as peptic ulcer or intracranial hemorrhage.

After single and repeated oral doses of 75 mg per day,clopidogrel is rapidly absorbed. Clopidogrel mean peak plasma levels occurre dapproximately 45 minutes after dosing. Absorption is at least 50%, based onurinary excretion of clopidogrel metabolites.

Clopidogrel and the main circulating inactive  metabolites bindreversibly in vitro to human plasma proteins (98% and 94% respectively). The binding isnon saturable in vitro up to a concentration of 100 mcg/ml.

Clopidogrel is extensively metabolised in liver .

One mediated by esterases and leading to hydrolysis into its carboxylic acid derivative, which is inactive and is the maincirculating metabolite.

The inhibition of platelet aggregation by clopidogrel is entirely due to an activemetabolite. Clopidogrel is metabolized to this active metabolite in part by CYP2C19. Therefore, avoid use of Norgrel in patients with impaired CYP2C19 function due toknown genetic variation or due to drugs that inhibit CYP2C19 activity, such as protonpump inhibitors (PPIs). But there is no evidence that other drugs that reduce stomach acid, such as most H2 blockers (except cimetidine, which is a CYP2C19inhibitor) or antacids interfere with the antiplatelet activity. (see Precautions;Drug Interactions).

CLOPIDOGREL BISULFATE prolongs the bleeding time and therefore should be used with caution in patients who may be at risk of increased bleeding from trauma, surgery, orother pathological conditions (particularly gastrointestinal and intraocular).

Norgrel should be discontinued 5 days prior to surgery if antiplatelet effect is not desired.

Due to therisk of bleeding and undesirable hematological effects, blood cell countdetermination and/or other appropriate testing should be promptly considered,whenever such suspected clinical symptoms arise during the course of treatment (see Adverse Reactions)

Clopidogrelis metabolized to its active metabolite in part by CYP2C19. Concomitant use ofdrugs that inhibit the activity of this enzyme results in reduced plasma concentrations of the active metabolite of clopidogrel and a reduction inplatelet inhibition. Therefore, avoid concomitant use of drugs that inhibitCYP2C19, including omeprazole, esomeprazole, cimetidine, fluconazole,ketoconazole, voriconazole, etravirine, felbamate, fluoxetine, fluvoxamine, andticlopidine (see Warnings).

Co-administrationof heparin had no effect on inhibition of platelet aggregation induced by CLOPIDOGREL BISULFATE.

CLOPIDOGREL BISULFATE did not necessitate modification of the heparin dose or alter the effect of heparin on coagulation.

NSAIDs and Norgrel should be co-administered with caution.

The concomitant administration of warfarin with CLOPIDOGREL BISULFATE should beunder taken with caution. (See Precautions).

In animalstudies and at much higher doses than recommended doses administered to humans, CLOPIDOGREL BISULFATE has no carcinogenic or mutagenic effect and it has no effect on fertility of males and females.

There are no adequate and well-controlled studies in pregnant women.So, Norgrel should be used during pregnancy only if clearly needed.

It is not known whether CLOPIDOGREL BISULFATE is excreted in human milk. Because many drugs are excreted in human milk and because of the potential for serious adverse reactions in nursing infants, a decision should be made whether to discontinue nursing or to discontinue the drug, taking into account the importance of the drug to the nursing woman.

Safety and effectiveness in the pediatric population have not been established.

Adverse reactionsin geriatric patients that threatened life were below 3.7% and they were not more than placebo.

The overall tolerability of CLOPIDOGREL BISULFATE is similar to that of aspirin regardless of age, gender and race.

The following adverse reactions are most common:

Gastrointestinal hemorrhage occurred at a rate of 2.0%, and required hospitalization in 0.7%. In patients receiving aspirin, the corresponding rates were 2.7% and 1.1%,respectively.

Other adverse reactions were less than 1% and were rare like: Allergic reaction, Necrosis ischemic, Edema generalized, Gastrointestinal Bleeding etc ……. .

Over dose following  Norgrel administration may lead to prolonged bleeding time and subsequent bleeding complications. Asingle oral dose of clopidogrel at 1500 or 2000 mg/kg was lethal to miceand to rats and at 3000 mg/kg to baboons.

Symptoms of acute toxicity were: vomiting (in baboons), prostration, difficult breathing,and gastrointestinal hemorrhage in all species.

Based onbiological plausibility, platelet transfusion may be appropriate to reverse the pharmacological effects of CLOPIDOGREL BISULFATE if quick reversal is required.

The recommended daily dose of Norgrel is 75 mg once daily.

For patients with non-ST-segment elevation acute coronary syndrome (unstable angina/non-Q-wave MI), Norgrel should beinitiated with a single 300 mg loading dose and then continued at 75 mg once daily.Aspirin (75 mg - 325mg once daily) should be initiated and continued incombination with Norgrel.Most patients with acute Coronary Syndrome also received heparin acutely.

For patients with ST-segment elevation acute myocardial infarction, the recommended dose of Norgrel is 75 mg once daily, administered in combination with aspirin, with or without thrombolytics.Norgrel may be initiated with or without a loading dose (300 mg).

No dosage adjustment is necessary for elderly patients or patients with renal disease.

Norgrel should be stored at controlled room temperature 25° C, away from moisture.