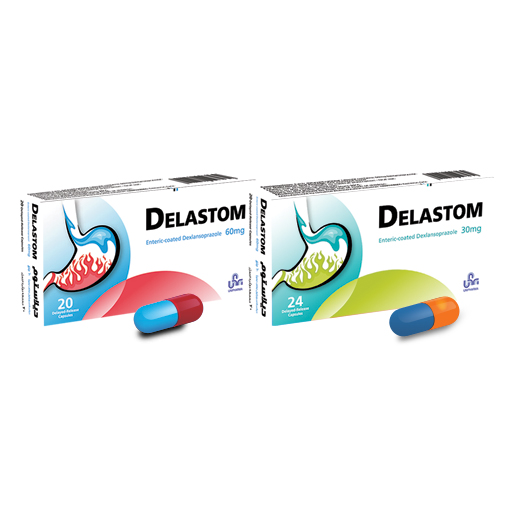 Delastomis a proton pump inhibitor (PPI) that suppresses gastric acid secretion by specific inhibition of the (H+, K+)-ATPase in the gastricparietal cell.

In patients treated for more than 6 months, mean serum gastrin levels increased during the first 3 months of treatment and were stable for the remainder oftreatment.

Dexlansoprazoleis extensively metabolized in the liver by oxidation, reduction, and subsequent formation of sulfate, glucuronide and glutathione conjugates to inactive metabolites.

Following the administration of  Delastom,approximately 50.7% is excreted in urine and 47.6% in the feces.

Delastom can be taken without regard to food.

Healing of all grades of erosive esophagitis (EE).

Maintain healing of erosive esophagitis (EE) and relief of heartburn.

Delastomis contraindicated in patients with known hypersensitivity to any component of the formulation.

Hypomagnesemia has been reported rarely with prolonged treatment with PPIs.

Bone Fracture: Long-term andmultiple daily dose (PPI) therapy may be associated with an increased risk forosteoporosis-related fractures of the hip, wrist or spine.

Atazanavir : Co-administration of Delastom and atazanavir may substantially decrease the systemic concentrations.

Healing of erosive esophagitis(EE): 60 mg once daily for up to 8 weeks.

Maintenance of healed erosive esophagitis (EE): 30 mg once daily for up to 6 months.

Nostudies were conducted in patients with severe hepatic impairment

Delastom can be taken without regard to food.

Delastom should be swallowed whole.Alternatively, capsules can be opened, sprinkled on one tablespoon of applesauce, and swallowed immediately.

Use in Specific Populations:

Pregnancy Category B. Delastom should be used during pregnancy only if clearly needed.

Pediatric Use: Safety and effectiveness of Delastom in pediatric patients (less than 18 years ofage) have not been established.

Renal and Hepatic impairment: No dosage adjustment of Delastom is necessary in patients with renal or hepaticimpairment.

Non-seriousadverse reactions observed with twice daily doses of Delastom 60 mg include hotflashes, contusion, oropharyngeal pain, and weight loss. Dexlansoprazole is notexpected to be removed from the circulation by hemodialysis.

If an overdose occurs, treatment should be symptomatic and supportive.

Delastom should be stored at temperature 25°C, and should be kept out of reach of children.