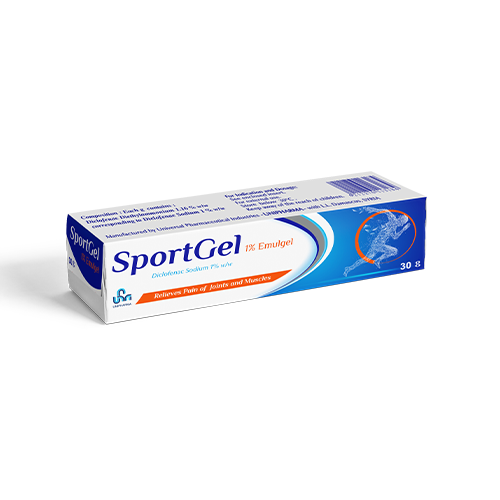 Composition:
Each tube contains Diclofenac diethylammonium 1.16% w/w corresponding to diclofenac sodium 1% w/w.
Properties:
Diclofenac Emulgel is a non-steroidal anti-inflammatory (NSAID) and analgesic preparation designed for external application. Due to an aqueous-alcoholic base, the gel exerts a soothing and cooling effect.
Pharmacokinetic Properties:
When diclofenac Emulgel is applied locally, the active substance is absorbed through the skin approximately 6% of the dose applied is absorbed, after topical administration of diclofenac Emulgel to hand and knee joints diclofenac can be measured in plasma, synovial tissue and synovial fluid. Maximum plasma concentrations of diclofenac are about 100 times lower than after oral administration of diclofenac.
Indications:
• For the local symptomatic relief of pain and inflammation in:
- Trauma of the tendons, ligaments, muscles and joints, e.g. due to sprains, strains and bruises.
- Localized forms of soft tissue rheumatism. (It is recommended that treatment be reviewed after 14 days)
• For the treatment of osteoarthritis of superficial joints such as the knee, therapy should be reviewed after 4 weeks.
Contraindications:
• Patients with or without chronic asthma in whom attacks of asthma, urticaria or acute rhinitis are precipitated by aspirin or other non-steroidal anti-inflammatory drugs (NSAIDs).
• Hypersensitivity to diclofenac or any of the excipients.
• Third trimester of pregnancy.
• The use in children and adolescents aged less than 14 years is contraindicated.
Dosage and Method of Administration:
Adults: diclofenac Emulgel should be rubbed gently into the skin. Depending on the size of the affected site to be treated 2-4 g (a circular shaped mass approximately 2.0-2.5 cm in diameter) should be applied 3 - 4 times a daily. After application, the hands should be washed unless they are the site being treated.
Use in the elderly: The usual adult dosage may be used.
Children and adolescents: There are insufficient data on efficacy and safety for the children and adolescents below 14 years of age.
In children aged 14 years and over, if this drug is required for more than 7 days for pain relief or if the symptoms get worse the patient or parent of the patient is advised to consult a doctor.
Diclofenac Emulgel is suitable for the transmission of ultrasound and may be used in combination with ultrasound therapy. If large areas of the body are covered with gel, systemic absorption will be greater and the risk of side-effects increased, especially if the therapy is used frequently.
Warnings and Precautions:
• The posibility of systemic adverse effects from application of diclofenac Emulgel cannot be excluded if it is used on large areas of skin and over a prolonged period.
• Diclofenac Emulgel contains propylene glycol, which may cause mild, localised skin irritation in some people.
• Concomitant use of oral NSAID's should be cautioned as the incidence of untoward effects, particularly systemic side effects, may increase.
• Diclofenac Emulgel should not be co-administered with other drugs containing diclofenac.
• Diclofenac Emulgel should be applied only to intact, non-diseased skin and not to skin wounds or open injuries.
• It should not be allowed to come into contact with the eyes or mucous membranes, and should not be ingested.
• The treatment should be discontinued if a skin rash develops after applying the drug.
• Diclofenac Emulgel can be used with non-occlusive bandages but should not be used with an airtight occlusive dressing.
• Some possibility of gastro-intestinal bleeding in those with a significant history of this condition has been reported.
Drug Interaction:
Since systemic absorption of diclofenac from a topical application is very low, such interactions are unlikely. There are no known interactions with diclofenac Emulgel.
Pregnancy:
During the first and second trimester of pregnancy, diclofenac should not be given unless clearly necessary. If diclofenac is used by a woman attempting to conceive, or during the first and second trimester of pregnancy, the dose should be kept as low and duration of treatment as short as possible.
During the third trimester of pregnancy, diclofenac is contraindicated.
Lactation:
Like other NSAIDs, diclofenac passes into breast milk in small amounts. Because of a lack of controlled studies in lactating women, the drug should only be used during lactation under advice from a healthcare professional. Diclofenac Emulgel should not be applied on the breasts of nursing mothers or elsewhere on large areas of skin or for a prolonged period of time.
Undesirable Effects:
Common: Rash, eczema, erythema, dermatitis (including dermatitis contact), pruritus
Rare: Dermatitis bullous|
Overdose:
The low systemic absorption of diclofenac Emulgel renders overdose very unlikely. However, undesirable effects, similar to those observed following an overdose of diclofenac tablets, can be expected if diclofenac Emulgel is inadvertently ingested.
Management of overdosage with NSAIDs essentially consists of supportive and symptomatic measures, Supportive and symptomatic treatment should be given for complications.
How Supplied:
Carton Pack contains aluminum tube of 30g or 50g.