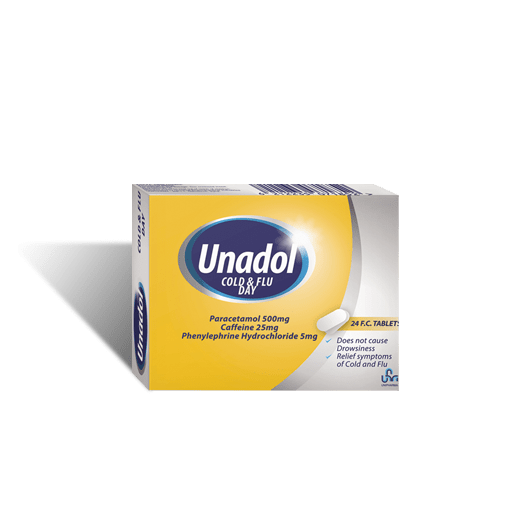 Unadol Cold & Flu Day
Film coated tablets
Composition :
Each Film  Coated tablet contains: Paracetamol 500 mg, Caffeine 25 mg, Phenylephrine Hydrocloride 5 mg.
Pharmacological properties:
Paracetamol is an analgesic and antipyretic. Phenylephrine hydrochloride is a sympathomimetic agent with mainly direct effects on adrenergic receptors (predominantly alpha-adrenergic activity) producing nasal decongestion. Caffeine is the most active xanthine derivative in respect of stimulation of the central nervous system, producing a condition of wakefulness and increased mental activity.
Pharmacokinetic properties:
Paracetamol is metabolised by the hepatic enzymes. It is rapidly and completely absorbed from the gastro-intestinal tract. Plasma concentration reaches a peak in half to one hour, the plasma half-life is one to three hours and it is uniformly distributed throughout the body.
Phenylephrine hydrochloride is irregularly absorbed from the gastro-intestinal tract.
Caffeine is readily absorbed from the gastro-intestinal tract.
Indications:
It is recommended for the relief of sinus pain and the symptoms of colds and influenza, including fatigue and drowsiness.
Posology and method of administration:
Adults, children aged 12 years and over and elderly: 2 F.C tablets up to 4 times a day. These doses should not be repeated more frequently than every four hours.
It should not be taken continuously for more than 7 days without medical advice; the stated dose should not be exceeded.

Pregnancy and lactation:
This product is not recommended for use in pregnancy due to the phenylephrine and caffeine content. There is a potential increased risk of lower birth weight and spontaneous abortion associated with caffeine consumption during pregnancy.
This product should not be used while breast-feeding without medical advice, Caffeine in breast milk may have a stimulating effect on infants. Phenylephrine may be excreted in breast milk.
Undesirable effects:
Paracetamol:
Due to limited clinical trial data, post-marketing experience indicates that adverse reactions to paracetamol are rare and serious reactions are very rare, events reported from extensive post-marketing experience at therapeutic dose are the following: Thrombocytopenia, Agranulocytosis, Anaphylaxis, Cutaneous hypersensitivity reactions including (skin rash, angiodema and Stevens Johnson syndrome, toxic epidermal necrolysis), Bronchospasm (There have been cases of bronchospasm with paracetamol, but these are more likely in asthmatics sensitive to aspirin or other NSAIDs), Hepatic dysfunction.
Caffeine:
The following Adverse reactions are identified through post-marketing use with caffeine; the frequency is unknown: Nervousness, anxiety, Irritability, Restlessness and Excitability, Dizziness
When the recommended paracetamol-caffeine dosing regimen is combined with dietary caffeine intake, the resulting higher dose of caffeine may increase the potential for caffeine-related adverse effects such as insomnia, restlessness, anxiety, irritability, headache, gastrointestinal disturbances and palpitations.
Phenylephrine:
The following adverse events have been observed in clinical trials with phenylephrine and may represent the most commonly occurring adverse events: Nervousness, Headache, dizziness, insomnia, increased blood pressure, Nausea, Vomiting
Overdose:
Immediate medical advice should be sought in the event of an overdose, because of the risk of delayed, serious liver damage.
Paracetamol: Liver damage is possible in adults who have taken 10g or more of paracetamol. Ingestion of 5g or more of paracetamol may lead to liver damage if the patient has risk factors (If the patient Is on long term treatment with (carbamazepine, phenobarbitone, phenytoin, primidone, rifampicin, St John's Wort or other drugs that induce liver enzymes), is Regularly consumes ethanol in excess of recommended amounts, Is likely to be glutathione deplete e.g. eating disorders, cystic fibrosis, HIV infection, starvation, cachexia).
Symptoms of paracetamol overdosage in the first 24 hours are pallor, nausea, vomiting, anorexia and abdominal pain. Liver damage may become apparent 12 to 48 hours after ingestion.
Immediate treatment is essential in the management of paracetamol overdose. Despite a lack of significant early symptoms, patients should be referred to hospital urgently for immediate medical attention. Symptoms may be limited to nausea or vomiting and may not reflect the severity of overdose or the risk of organ damage. Treatment with activated charcoal should be considered if the overdose has been taken within 1 hour. Treatment with N-acetylcysteine may be used up to 24 hours after ingestion of paracetamol. The effectiveness of the antidote declines sharply after this time.
Phenylephrine: Phenylephrine overdosage is likely to result in effects similar to those listed under adverse reactions. Additional symptoms may include hypertension, and reflex bradycardia.
Treatment should be as clinically appropriate. Severe hypertension may need to be treated with alpha blocking drugs.
Caffeine: Overdose of caffeine may result in epigastric pain, vomiting, diuresis, tachycardia or cardiac arrhythmia, CNS stimulation.
No specific antidote is available, but supportive measures may be used.
Storage conditions: Store below  25°C
How supplied:. 24 or 48 F.C. Tablets.