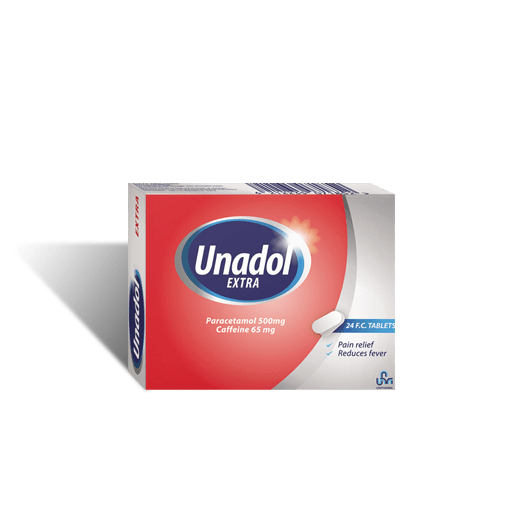 DOSAGE AND ADMINISTRATION:
Unadol Extra tablets are indicated to adults and children 12 years of age and older.
Two tablets every 4 to 6 hours (as required) with water .Maximum of 8 tablets in 24 hours.
Not recommended for children under 12 years of age.
Unadol Extra should not be used with other paracetamol containing products.

CONTRAINDICATIONS:
Unadol Extra Tablets are contra-indicated in patients with known hypersensitivity to Paracetamol, caffeine ,or to any of the excipients.
PREGNANCY AND LACTATION:
*Pregnancy category A: Both paracetamol and caffeine have been taken by large number of pregnant women and women of childbearing age without any proven increase in the frequency of malformations or other direct or indirect harmful defects on the fetus having been observed .
*Paracetamol is excreted in breast milk, but in usual analgesic doses does not appear to present a risk to the breastfed infant. Caffeine is excreted in breast milk in concentrations not thought to present a hazard ,although irritability and a poor sleeping pattern  have been reported .
USE IN CHILDREN: Not recommended in children under the age of 12 years .
SIDE EFFECTS: Very rare: Allergic dermatitis, insomnia and restlessness .

DRUG INTERACTIONS:
The anticoagulant effect of warfarin and other coumarins may be enhanced by prolonged regular  daily use of Paracetamol with increased risk of bleeding; occasional doses have no significant effect. Paracetamol absorption is increased by drugs which increase gastric emptying , e.g: metoclopramide ,and decreased by drugs which decrease gastric emptying ,e.g: propantheline ,antidepressants with anticholinergic properties ,narcotic analgesics. The likelihood of paracetamol toxicity may be increased by the concomitant use of enzyme inducing agents such as alcohol or anticonvulsant drugs .
No potentially hazardous interactions with caffeine have been reported.

OVERDOSAGE:
In massive over-dosage exceeding 10 g, the Tablets may cause liver damage. Early symptoms may cause pallor, nausea, vomiting, (diaphoresis) and gener¬al malaise.
Clinical and laboratory evidence of liver damage may not be apparent until 48 to 72 hours post-ingestion. Overdose should be promptly treated by gastric lavage followed by intravenous N-acetylcysteine or methionine without waiting for the results of plasma Paracetamol levels. Additional antidote therapy is normally considered in light of further plasma Paracetamol levels and the time elapsed since ingestion. In all cases of suspected over¬dose, prompt medical attention is critical for adults as well as for children, even if you do not notice any signs or symptoms