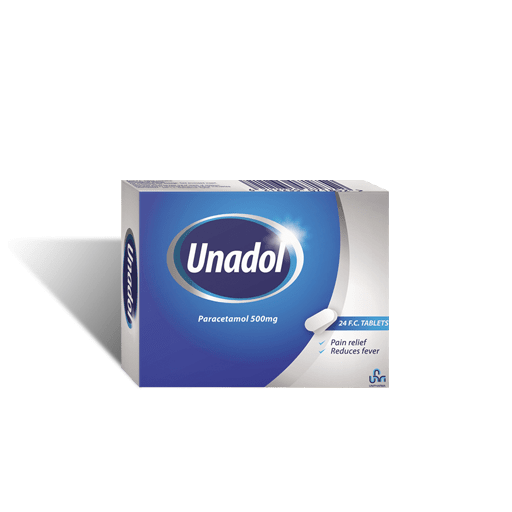 Unadol
F.C.Tablets
Composition:
Each film coated tablets contains: 500 mg Paracetamol.
Mechanism of action:
Analgesic effect: Paracetamol may act by inhibiting prostaglandin synthesis in the central nervous system (CNS) and to a lesser extent, through a peripheral action by blocking pain-impulse generation.
Antipyretic effect: paracetamol probably produces antipyresis by acting centrally on the hypothalamic heat-regulation center to produce peripheral vasodilation resulting in increased blood flow through the skin, sweating and heat loss.
Indications:
Unadol is indicated For the treatment of mild to moderate pain including headache, backache, migraine, neuralgia, toothache, sore throat, period pain, aches and pain, symptomatic relief of rheumatic pain, mascular pain and pains of cold & influenza, fever, feverish colds and post-immunisation fever.
Contraindications:
Hypersensitivity to paracetamol or any of the components.
Pregnancy and lactation:
Studies in human pregnancy have shown no ill effects due to paracetamol used in the recommended dosage, but patients should follow the advice of the doctor regarding its use.
Paracetamol is excreted in breast milk but not in a clinically significant amount. Available data do not contraindicate breast feeding.
Undesirable effects:
•    Adverse effects of paracetamol are rare. Very rarely hypersensitivity and anaphylactic reactions including skin rash may occur. Very rare cases of serious skin reactions have been reported.
•    There have been reports of blood dyscrasias including thrombocytopenia and agranulocytosis, but these were not causally related to paracetamol.
•    Chronic hepatic necrosis has been reported in a patient who took daily therapeutic doses of paracetamol for about a year and liver damage has been reported after daily ingestion of excessive amounts for shorter periods.
•    Nephrotoxicity following therapeutic doses of paracetamol is uncommon.
•    Papillary necrosis has been reported after prolonged administration.
•    Low level transaminase elevations may occur in some patients taking therapeutic doses of paracetamol; these are not accompanied with liver failure and usually resolve with continued therapy or discontinuation of paracetamol.

Dosage and method of administration:
•    Adults, the elderly and over 12 years: 2 tablets 500 mg every 4 hours to a maximum of 8 tablets.
•    Children 6 – 12 years:  ½ to 1 tablet (500 mg) every 4 hours to a maximum of 4 tablets in 24 hours.
•    Under 6 years of age: shouldn't be given.
Overdosage:
Liver damage is possible in adults who have taken 10g or more of paracetamol. Ingestion of 5g or more of paracetamol may lead to liver damage if the patient has risk factors: If the patient is on long term treatment drugs that induce liver enzymes or regularly consumes ethanol in excess amount or if the patient is glutathione depleted.
Symptoms: Symptoms of paracetamol overdosage in the first 24 hours are pallor, nausea, vomiting, anorexia and abdominal pain. Liver damage may become apparent 12 to 48 hours after ingestion.
Treatment: Immediate treatment is essential in the management of paracetamol overdose.
Treatment with activated charcoal should be considered if the overdose has been taken within 1 hour. Treatment with N-acetylcysteine may be used up to 24 hours after ingestion of paracetamol.
Storage conditions:
Store below 25°C. Protect from light. Store in the original package.
How supplied: 24 , 48 , 96 film coated tablets.