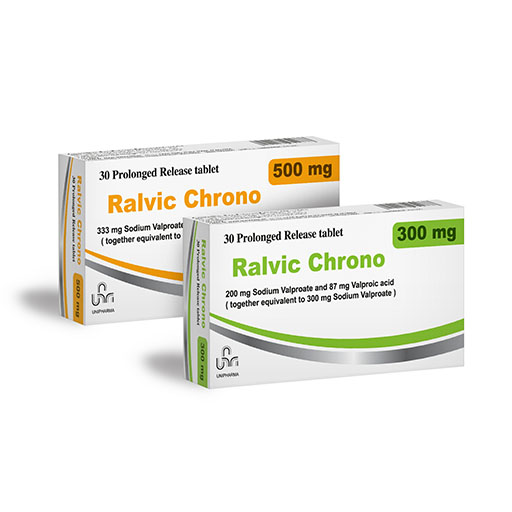 Sodium valproate is an anticonvulsant.

The most likely mode of action for valproate is potentiation of the inhibitory action of gamma amino-butyric acid (gaba) through an action on the further synthesis or further metabolism of gaba.

Pharmacokinetics:
the half-life of sodium valproate is usually within the range 8 - 20 hours. It is usually shorter in children.

In patients with severe renal insufficiency it may be necessary to alter dosage in accordance with free plasma valproic acid levels.

Mania: for the treatment of mania where other therapy has proved inadequate or is inappropriate.

Use in pregnancy (category D ) :
During pregnancy, maternal tonic-clonic seizures and status epilepticus with hypoxia carry a particular risk of death for mother and for the unborn child. The risk of a mother with epilepsy giving birth to a baby with an abnormality is about three times that of the normal population.

Start at 10 to 15 mg/kg/day, increasing at 1 week intervals by 5 to 10 mg/kg/day to achieve optimal clinical response; if response is not satisfactory, check valproate plasma level; see full prescribing information for conversion to monotherapy.

The recommended starting dose is 500 mg/day for 1 week, thereafter increasing to 1,000 mg/day.