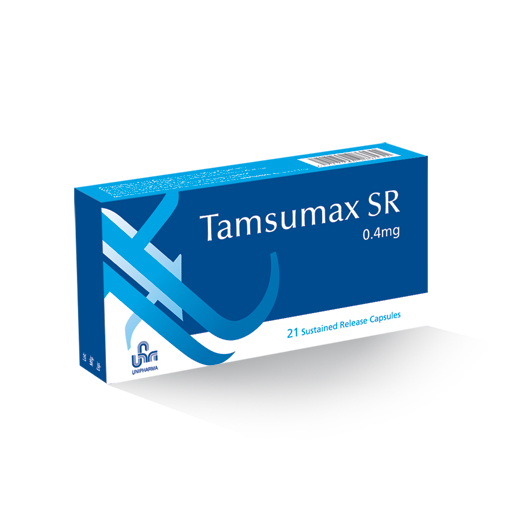 One capsule daily, to be taken after 30 minutes following the same meal everyday.

The capsule should be swallowed whole and should not be crunched or chewed as this will interfere with the modified release of the active ingredient.

Hypersensitivity to tamsulosin hydrochloride or any other component of the product ,or a history of orthostatic hyotension; severe hepatic insufficiency.

Special warnings and precautions for use:

As with other alpha 1 blockers, a reduction in blood pressure can occur in individual cases during treatment with Tamsumax SR. as a result of which, rarely, syncope can occur. At the first signal; of orthostatic hypotension (dizziness, weakness) the patient should sit or lie down until the symptoms have disappeared.

The intraoperative  Floppy Iris Syndrome (IFIS) has been observed during cataract surgery in some patients on or previously treated with tamsulosin.

Tamsumax SR should not be given to a man who experiences postural hypotension.

Tamsumax SR should not be supplied to any man with heart, renal or liver disease, uncontrolled diabetes, urinary incontinence or to a man who has had prostate surgery.

Tamsumax SR should not be supplied to a man whose symptoms are of less than 3 months duration.

Tamsumax SR should not be given to any man who reports dysuria, haematuria, or cloudy urine in the past 3 months, or who is suffering from a fever that might be related to a urinary tract infection.

Tamsumax SR should not be used in those planning to have eye surgery for cataract or who have recently experienced blurred or cloudy vision that has not been examined by a GP or Optician.

If urinary symptoms have not improved within 14 days of starting treatment with Tamsumax SR or are getting worse,  the patient should stop takeing tamsumax SR and be referred to the doctor.

In the vitro neither diazepam nor propranolol, trichlormethiazide, chlormadinon, amitryptyline, glibenclamide, diclofenac, simvastatin and warfarin change the free fraction of tamsulosin in human plasma, neither does tamsulosin change the free fraction fo diazepam, propranolol, trichlormethiazide, chlormadinon.

Every 12 months, patients should be advised to consult a doctor for a clinical review.

Medical review is required for the diagnosis of BPH. Patients must see their doctor within 6 weeks of starting treatment for assessment of their symptoms and confirmation that they can continue to take Tamsumax.

Tamsulosin is absorbed from the intestine and is almost completely bioavailable.

Absorption of Tamsulosin is reduced by a recent meal.

Uniformity of absorption can be promoted by the patient always taking Tamsumax SR after the same meal each day.

After a single dose of Tamsumax SR in the fed state, plasma levels of Tamsulosin peak at around 6 hours and, in the steady state, which is reached by day 5 of multiple dosing, Cmax in patients is about two thirds higher than that reached after a single dose. Although this was seen in elderly patients the same finding would also be expected in young ones.

There is a considerable inter-patient variation in plasma levels both after single and multiple dosing.

In man, tamsulosin is about 99% bound to plasma proteins and volume of distribution is small (about 0.2 l/kg).

Tamsulosin has a low first pass effect, being metabolised slowly. Most tamsulosin is present in plasma in the form of unchanged drug. It is metabolised in the liver.

In rats, hardly any induction of microsomal liver enzymes was seen to be caused by tamsulosin.

No dose adjustment is warranted in hepatic insufficiency.

None of the metabolites are more active than the original compound.

Tamsulosin and its metabolites are mainly excreted in the urine with about 9% of the dose being present in the form of unchanged drug.

After a single dose of TamsumaxSR  in the fed state, and in the steady state in the patients elimination half-lives of about 10 to 13 hours respectively have been measured.

The presence of renal impairment does not warrant lowering the dose.