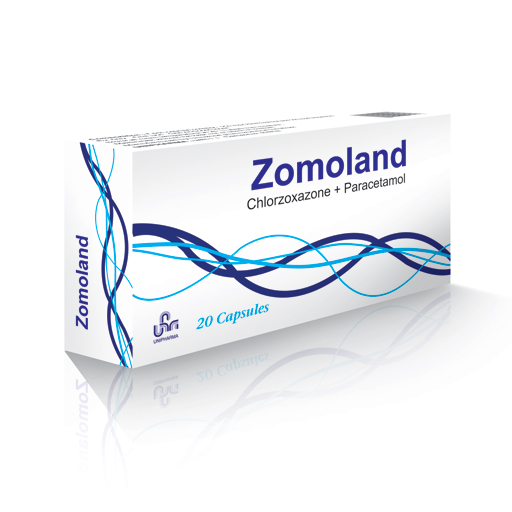 Chlorzoxazoneis a centrally acting muscle relaxant, which exerts its effect at the level of the spinal cord and sub-cortical areas of the brain to inhibit multisynapticreflex arcs responsible for skeletal muscle spasm. Paracetamol has an analgesic effect on skeletal muscle.

Chlorzoxazoneis completely absorbed after oral administration and peak plasma concentrations are achieved after 1 to 2 hours.

Paracetamol is readily absorbed from the gastrointestinal tract with peak plasma concentrations occurring about 10 to 60 minutes after oral doses.

Distribution: Binding to plasma proteins is minimal at therapeutic concentrations.

Metabolism: Chlorzoxazone and paracetamol are metabolized in the liver.

It is indicated for treating pain and spasm of the skeletal muscles in:

Hypersensitivity to any of the components

Irritations of the gastrointestinal tract, somnolence,vertigo, headaches, nausea, over-excitability may sometimes occur. Allergic skin phenomena such as eruptions, petechiae, and ecchymosis are also known to occur, but angioneurotic oedemas or anaphylactic reactions are extremely rare.

The risk of paracetamol hepatic toxicity may be increased in patients receiving other potentially hepatotoxic drugs.

The absorption of paracetamol may be accelerated by drugs such as metoclopramide.

Excretion maybe affected and plasma concentrations altered when given with probenecid.

Caution should be taken with drugs that cause drowsiness such as: certain antihistamines,anti-seizure drugs, medicines for sleep or anxiety, other muscle relaxants,narcotic pain relievers, psychiatric medicines.

The CNS effects of chlorzoxazone may be enhanced by concomitant use of other central nervous system depressants.

Caution is advised with patients known to be hypersensitive to drugs.

Color change of the urine, due to a phenolic metabolite of Chlorzoxazone may occur.

Serious hepatocellular toxicity has been reported rarely in patients receiving chlorzoxazone. Drug must be discontinued immediately and a physician consulted if any Signs and/or symptoms of hepatotoxicity occur such as fever, rash,anorexia, nausea, vomiting, fatigue, right upper quadrant pain, dark urine or jaundice.

Chlorzoxazone use should also be discontinued if a patient develops abnormal liver enzymes.

The concomitant use of alcohol or other central nervous system depressants may have an additive effect.

Caution should be taken into consideration when driving vehicles.

It is not recommended during pregnancy or lactation.

Following overdose there might be gastrointestinal disturbances, drowsiness, dizziness,headache, malaise and sluggishness followed by marked loss of muscle tone, hypotension and respiratory depression. Paracetamol overdose may cause liver failure.

Treatment consists of emptying the stomach by lavage or emesis, followed by administration of activated charcoal.

Administration of N-Acetylcysteine or Methionine may be required as a paracetamol antidote.

Store below 30°C , protect from moisture.